The Phillip island Penguin Parade – Home to the little Penguins

The Phillip island Penguin Parade – Home to the little Penguins

A trip to Phillip island is full of highlights and attractions along the way. Wildlife conservation Parks, heritage farms, quaint towns and pristine beaches all set on a stunning backdrop. For almost everyone though the highlight of the day will undoubtedly be The Penguin Parade. 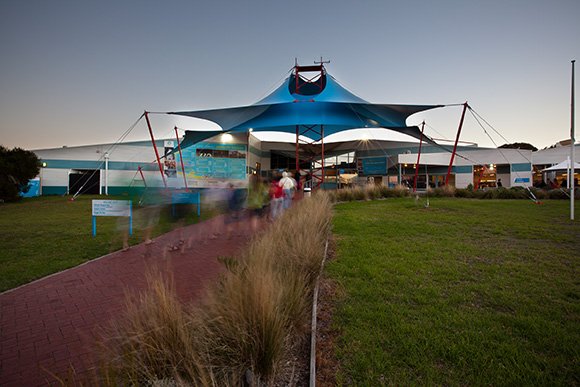 What is the Penguin Parade?

A purpose built attraction compromising an information centre and purpose built boardwalks and grandstands. Its purpose is to educate people from all over the world about the planets smallest penguin – the little penguin.

At sunset the opportunity to see hundreds to thousands of penguins return home from the ocean and walk right past you draws visitors from all corners of the world. The lighting works on the red eye spectrum and there are purpose built boardwalks and seating areas to ensure there is minimal impact on the environment as people gather to watch the penguins. But why exactly was the Penguin Parade built? How did it come about?

The History of the penguin parade 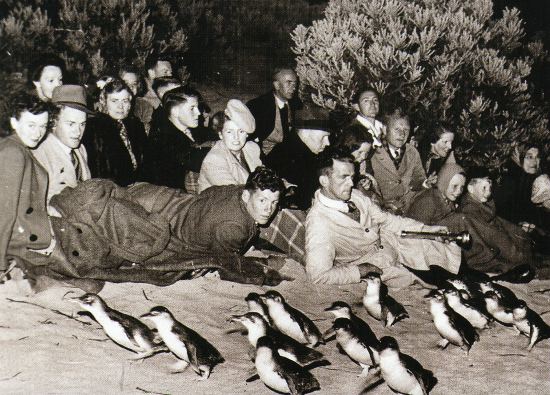 The Arrival of penguins at Summerland Peninsula back in the day.
1798 was the year Phillip island was discovered by explorer George Bass but dont worry we won’t go back that long ago. Residents of the island Bert Watchorn and Bern Denham started guiding tourists by torchlight to Summerland beach to watch the penguins return to their burrows back in the 1920’s. Transport to the island had just recently become a lot easier with a ferry service starting up to take people to the island from the fishing town of San Remo.

Visitors would bring along their picnic blankets and lie down on the beach and vegetation. Not realising they were crushing the penguin’s burrows and the vegetation. Some would also bring their dogs along which led to some of the creatures being attacked and killed. Summerland was divided into 774 housing allotments in the late 1920’s and people began building holiday houses in the middle of the penguin colonies.

In 1939 the first Bridge was built from San Remo to Phillip Island creating even easier access and pushing tourism numbers and housing up further still. The first bridge was made of wood and had a strict weight limit. By 1955 the department of fisheries and wildlife realised what impact this was having on the penguin population and constructed a concrete viewing stand and fencing to control access to the area and minimise damage. in the late 60’s a new concrete bridge was built again increasing the ease of access to the island.

The Phillip Island Penguin Reserve Committee of Management was formed in the mid 1980’s and in 1985 they announced the penguin management plan. The plan was necessary due to the massive decline in the population of the penguins. Beginning with over 13 colonies and 70,000 penguins the number had gone down to just 13,000 and 3 colonies.

There were many factors in the decline of the population with human impact having a large effect. Houses being built in the middle of the colonies destroyed vegetation and burrows but there were other factors such as foxes known for killing up to 40 penguins in one night! 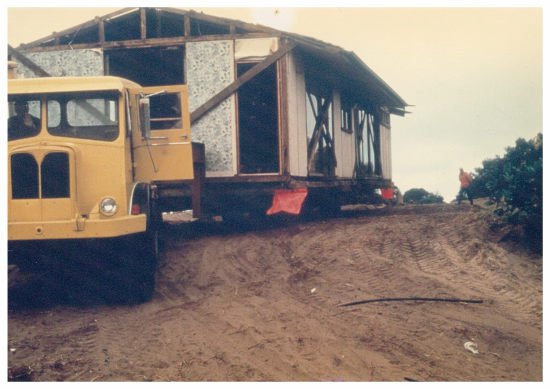 House being removed from Summerland During Buyback
Scientific research, fox management and also a buyback program for houses in Summerland were all part of the penguin management program. This is still considered the first time in the world where a town has been bought back in the name of wildlife conservation. All the houses on the summerland peninsula were bought back by the Government and the vegetation native to the area was replanted. The buyback was completed in 2011. 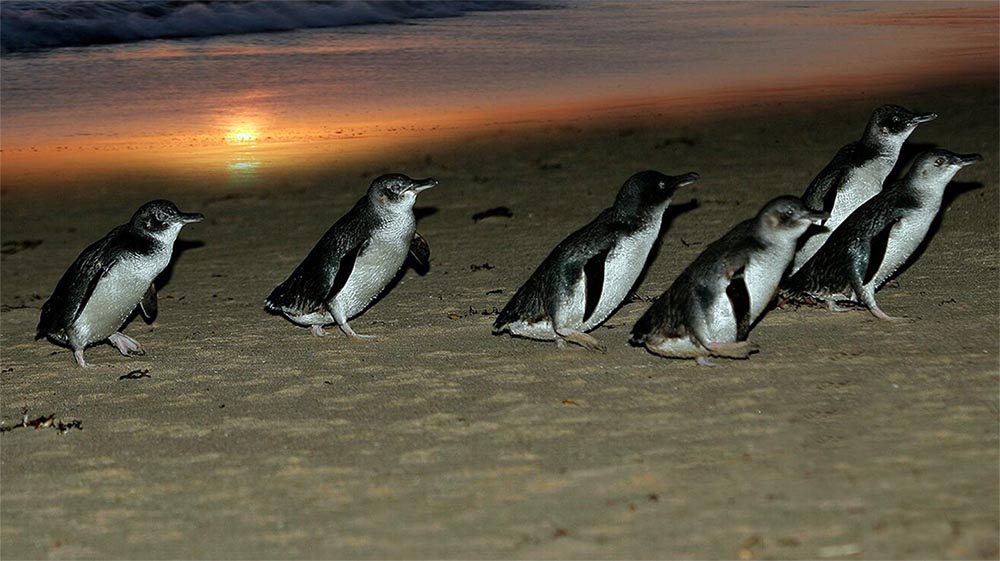 Penguins arriving at the Penguin Parade
Thanks to all the efforts of Phillip Island Nature Parks the numbers of penguins are back up to over 32,000 and on the increase. There are over 6000 penguins that call the penguin parade home which allows for the viewing of 200 to 2000 penguins or more returning home to their burrows from the viewing platforms each night.

A non for profit organisation – Phillip Island Nature parks uses all money spent at the Penguin Parade to reinvest in the interest of wildlife on the island. The visitors centre is receiving a major upgrade this year(2018) with the visitor and bus car parks being relocated away from the centre. New vegetation is being planted in the old location of the parking area has lots of penguins tend to wander through and the plan is to stop the opportunity of the penguins being run over.

Attractions, Amenities and options at the penguin parade

Penguin Parade Visitors Centre
The southwestern edge of Phillip Island is where you’ll find the Nobbies centre and Boardwalk. You can walk along here and enjoy the chance to see little penguins nesting and view the Seal Rocks which are home to thousands of Australian Fur Seals.

The centre itself has information, a cafe, a shop and also the Antarctic Journey. There is a small fee for this and it is the opportunity to learn about the world’s most extreme continent. Leaving the Nobbies there is a dirt track along the coast where you have the chance to view wallabies and penguins in their burrows. this road leads you back directly to the penguin parade.

Inside the Penguin parade visitors centre there are food stalls where you are able to purchase hot drinks, pies, popcorn and also full meals. A cinema plays informative videos and there is an information area where you can educate yourself further on the little penguins. A gift shop sells all sorts of memorabilia which you can take home for a loved one or of course, yourself.

There are a few different options available for viewing the penguins which are listed below.

Standard viewing –This area is included in the price of your ticket and is the main grandstand where most people will sit. Arrive early to get a good seat and enjoy the ranger talk. After watching a few groups of Penguins arrive from the Ocean walk back up the boardwalk to see penguins everywhere!

Penguins Plus –This is the path to the right as you walk down the boardwalk to the beach. It is limited to 190 people and offers fantastic up close viewing of the penguins. Statistically 70% of the penguins use this area as access from the beach.

Penguins Plus Underground –View the penguins up close on their level in an enclosed area that is limited to 70 people.

Guided Ranger Tour – Front row reserved seats on the sand at the general viewing area, access to Penguins Plus and a ranger guide!

VIP Tour –Enjoy VIP treatment, elevated views and a close encounter with the penguins on this ranger guided tour with access to Penguins Plus. 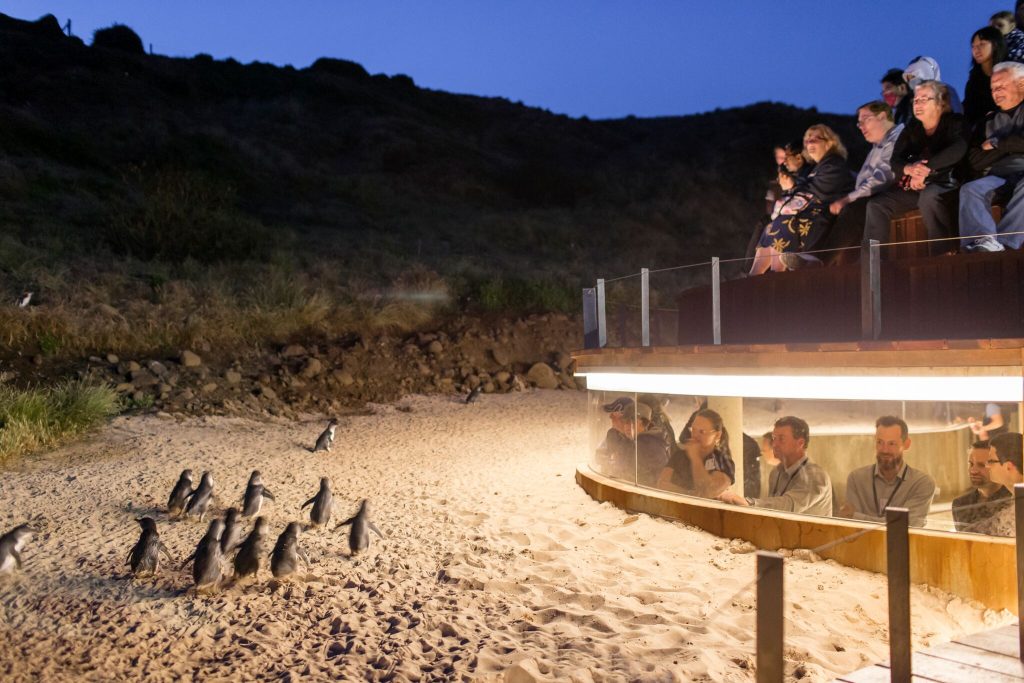 Penguins Plus
Make the Penguin Parade Part of your journey by joining us on a full day or afternoon tour of Phillip Island.

Bunyip Tours caught up with Charles from the Peninsula Hot Springs to find out how it got started and what makes it such an amazing place to visit!
Read More

How to Spend 72 Unforgettable Hours in Melbourne

Our friends at Flight Network have written an awesome article on spending an unforgettable 72 hours in the great city of Melbourne. Not on...
Read More

It has been my dream to visit Erinsborough since I was a little kid. Today was the day it finally happened. At 10:00 am, I departed...
Read More